Been a minute since I posted. A dear friend of mine suggested that I just start up like I never stopped blogging-just to get going again. 😉 I like it. (Thanks Linda).

So, here’s the proverbial dipping my toe back in the pond with a simple hello.

Lots has happened, lots going on, and more to follow.

I’ll catch you up as we proceed. Here we go.

As a caveat-I do understand that while engaging in strict survival situation you don’t have to have anything more than food, water and some way to limit your body’s exposure to extreme elements–However, I am writing about off-grid, continual living, with the intent to constantly learn and improve! In other words-striving to thrive, not just survive!!!

We reside in a comparatively rural area. I say comparatively because we are by no means hell and gone from anywhere, regardless how my city friends might disagree. As always, all things, including off-gridness are as they should be, wholly relative. 😉

The last power pole in our area is more than half mile up the road. Save ambient light from our neighbors 1 to 5 miles away and the closest town which is 15 miles away, we are in the dark once the sun goes down.

Note the picture above. It’s not a mistake of me having my thumb over the camera lens. It is my view at night outside. That small dot of light is the solar Christmas lights inside the outhouse.

Like most humans, my eyes can only adjust so far to the dark-which, thanks in most part to the evolution of fire and light use in our species, is not very much. Thus, without it, I am left fumbling about as my brain attempts to echolocate objects by my grunts as I run into them.

As a solution to this, may I present the first must have item:

Same pic as above with headlamp assistance.

Simple to use, fairly cheap (under 25$), cost-effective to operate (especially if you use solar-recharged batteries), small and portable-either on your head or in a pocket. 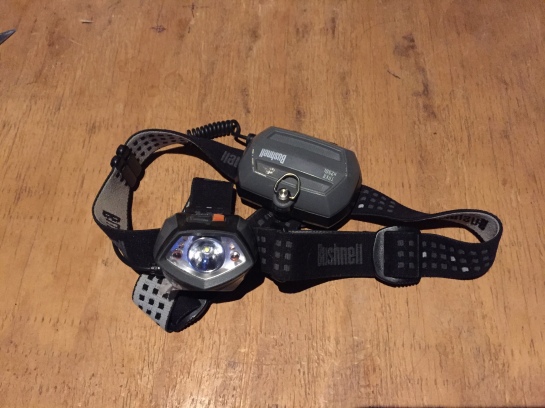 This particular model is 250 Lumens (bright), has a tilting head for placing light where it is most important, and a separate battery pack (the grey box on the back). Seems clunky-but, because if the battery pack I have bright light for many uses before having to change batteries.

Note also that because it has straps, it is able to be hung and wrapped around things if needed as well, making it a kitchen light, desk light, bedroom and chicken coop light all in one!

Although you could sub flash light for headlamp, the noteworthy difference is the ability to have directive light, hands-free. That distinction, when we first started out here alluded me until I found myself with a flashlight in my teeth, drooling on whatever project I was working on.

In the summer time we, like most other places have flying insects. At dusk, after dark and early in the morning, those mostly consist of mosquitos and gnats. Because the light is sitting squarely between and above your eyes, it is a bullseye landing zone for those insects.

(I was working outside one morning, with mosquitos buzzing around my face, and one flew INTO my eye…and then bit me. I ended up with a blister ON my eye…)

Above is the extreme example, however noteworthy and strange, bugs in the face are normally just an irritant I haven’t figured out a way around.

A second and final disadvantage is trying to have conversations with a head lamp on.

What happens most often to me is I forget I’m wearing it and blind the person I want to talk to. Although it’s bad manners blinding my husband and others, as a drawback on a highly useful tool-its both temporary and easily fixable by turning it off!

Today it is stupid cold outside-about 20F at the moment-up from 17F this morning at 8.

When I got up it was approximately 38F in the shed-not too bad-no frozen dog water or dead plants!

I am working at home today, mostly to keep the four leggers inside and safe from the cold… 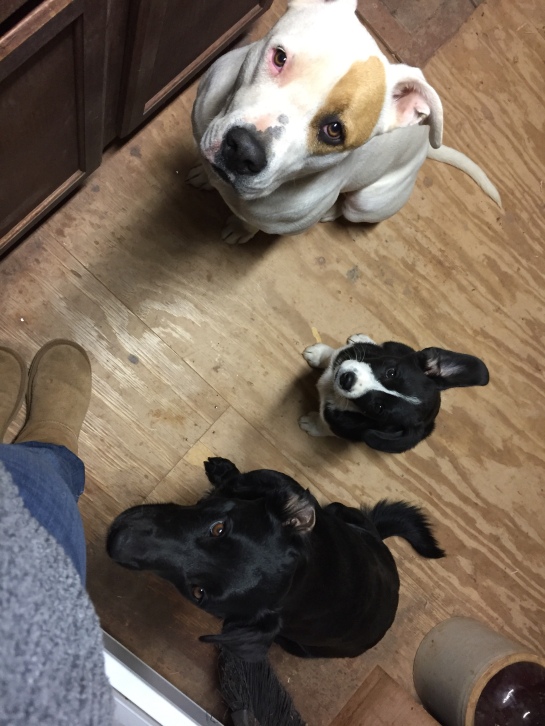 And also to do computer work sitting by a fire, eating leftover Matt’s famous chocolate-pecan pie and sipping some brilliant coffee gifted to me by my friend Jess. Ahhhh, my life is good and I am grateful.

After working a small fire in the stove since 8am, I’ve managed to get the temp up to 60F–very comfy-and what I consider to be the perfect indoor winter temp.

Why is it the perfect temp? Mostly because it’s about the best I can do without using a lot of wood and over firing the stove–so we call it perfect and dress accordingly!! 🙂

For all of you out in the cold today-try to stay warm, smile big, drink coffee and go find some pie–the day is half way over!

We have no refrigerator, and use a cooler to keep our food, well, cool. Over the past 4 years we have learned to cook just enough food to feed the two of us (with of course a few bites for our furry friends)-meaning few if any left overs, ever. Although I am personally a huge fan of last night’s dinner for breakfast, it is a tricky proposition keeping cooked food at a safe temperature in an ice chest…especially in the summer time, in a shed that gets up to 85-90F.

To keep from having left overs or fat dogs, we have refrained from cooking any liquid based food as in soup or beans. Both food choices, although delicious, make a lot of food and storing liquids in an ice chest is hazardous because the aforementioned bacteria and spills. Additionally, cooked beans MUST remain cold, not cool, otherwise they become rancid very quickly.

We received a jar of black bean soup mix as a gift from my aunt last year and never made it for the reasons mentioned above.

Well, spurred by a whole day off at the homestead and very cold weather, my husband put the beans on to soak last night. This afternoon we cooked them with some sausage and onions and had them for dinner.

Delicious! However, as expected, it made about a gallon of bean soup. Although we both ate a fair share of it (and no beans for dogs…) there was still 1/2 a gallon to store.

We both hate wasting food so the discussion began over the last bites as to how to save our black bean soup.

The first suggestion was to leave them on the stove over night in the large pot. Not a terrible idea, as it does tend to get down to the high 30s in here once the wood stove cools. They would probably be fine-but I didn’t feel like chancing food poisoning from the long process of them cooling down.

Then the we talked about putting them outside for the night as we will have close to sub zero wind chills and it will be about 17F in the morning. (Yes, we currently have a large open air deep freeze, called my front porch).

One problem-because we rarely store left overs, we possess NO food storage containers. We looked around and found two small pots with lids, divided the bean soup and set both on the front porch to freeze and be perfectly preserved. 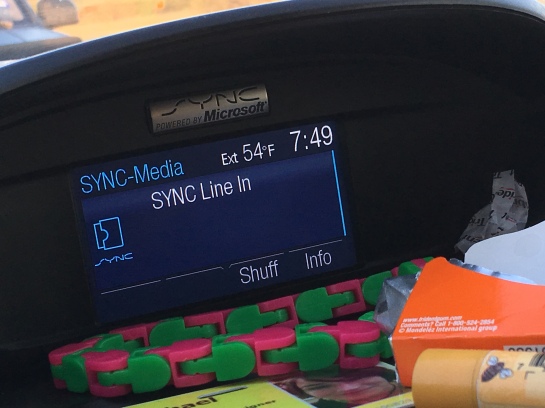 What happens when you get a foot of rain in a few weeks?

I don’t think I’ve ever seen the Texas panhandle green and lush-not to the extent it is now and definitely not in August!

No complaints, just lots of mowing to be done!

I’m not quite sure what constitutes plague status in the world of entomology-but I guarantee we have been close this summer.

I do believe we’ve gotten about 5 inches of rain in the past 4 days.  Most of it just heavy rain, no hail and no tornadoes.  Tonight, however, it got a little rowdy.  High winds, hail, tornadic stuff in the area.  All is well, at least here, but got some great pics! 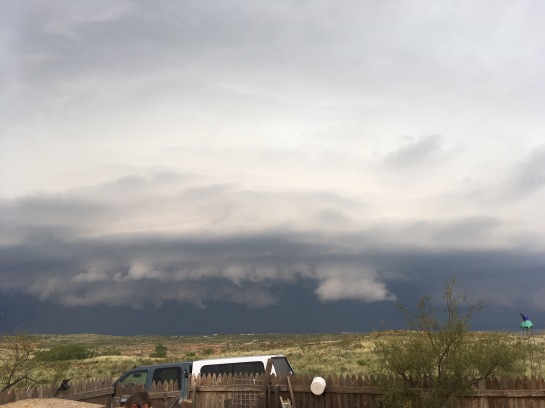 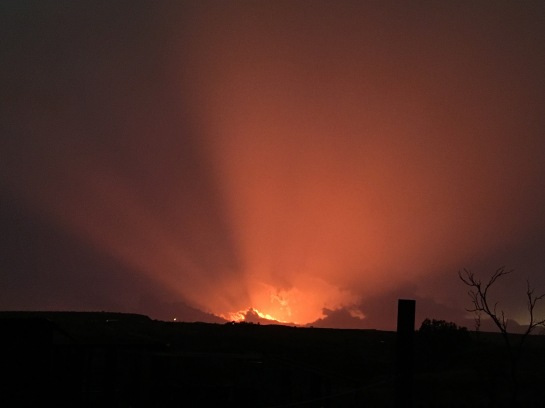 I have been sending these pics out to friends and family all night.  It occurs to me that I’m not sure I’d want to live anywhere where my sky view is limited.  It’s also another great reason to live off grid–no power lines in my pics!!!!